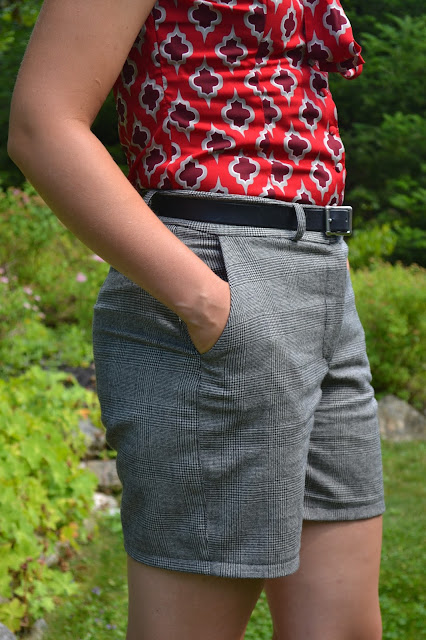 I was so excited about my first pair of Frida Shorts, that I immediately started a new pair once I was done. I'm on a roll! I am happy to say I now have 2 pairs of shorts that fit me, which is 2 more than before I started. I thought about pattern matching the plaid, but decided it was not worth the hassle and it isn't that important to me anyway. It turns out that once I started getting clothing that I wear and am proud of, finding time to sew is much easier, because the payoff is so clear. I need to purge my wardrobe so that I have more excuses to sew things. 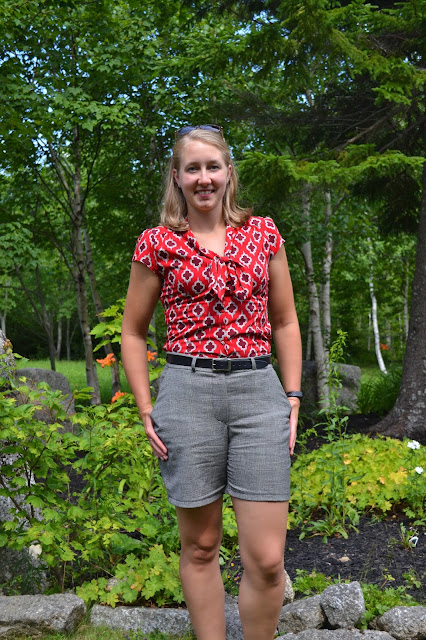 The biggest issue that I had was I printed out the final released version of the pattern, where Christina slimmed the legs down, but I forgot to factor in the lack of stretch in my material. To fix this, I just re-cut out the back 2 pieces in a bigger size, and it worked out alright. I was lucky that I had plenty of the fabric, otherwise I would have been in trouble. I used a red cotton for the binding on the waistband and for the pockets, and I really like the surprise pop of colour that often shows when I sit down. 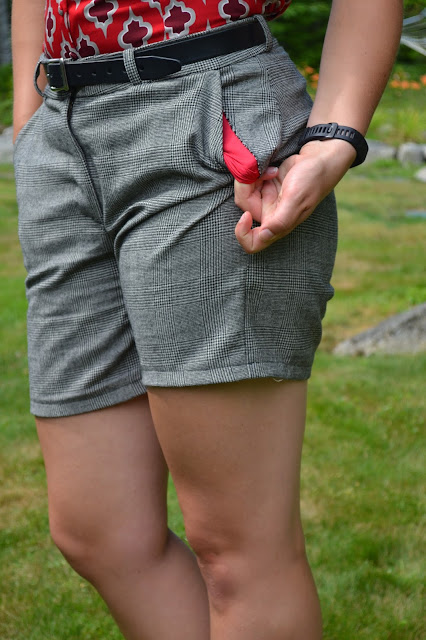 Pattern: Frida Shorts by Wardbrobe By Me (again!)
Material: $1 per yard from a lady off kijiji (we got a lot of fabric from her), and some left over red fabric from my valentine's day dress
Modifications: I grade out the hips 2 sizes and added 2 inches in length to the mid thigh length, then graded out the back pieces another size
Learning: Since this is my second time making the pattern, I didn't learn a whole lot. These turned out a little better than the last ones in the details, and the next ones will likely be even better!
Overall Impression: I love these shorts too! I was a little apprehensive about how much I would like them with this material, because I'm not that much of a plaid person, and it's a little itchy. The itchiness isn't too bad when I'm wearing them, and I like that the plaid makes them look a little more dressed up. I've already worn them to church and the office (yes, we are allowed to wear shorts), and they get good reviews. 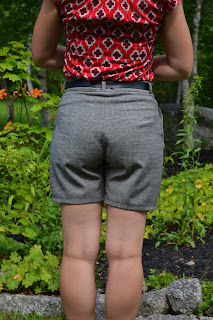 The top I'm wearing in this picture is an old one from Banana Republic that I bought to wear for my first co-op placement. I do intend to sew one like it in the future though!
Posted by Amanda Carolyn at 04:55 No comments: 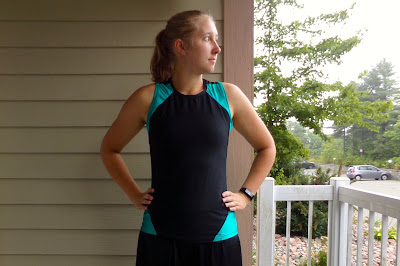 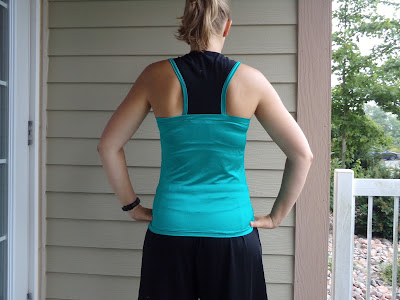 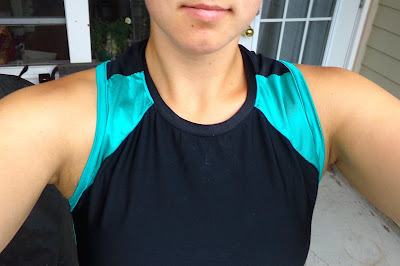 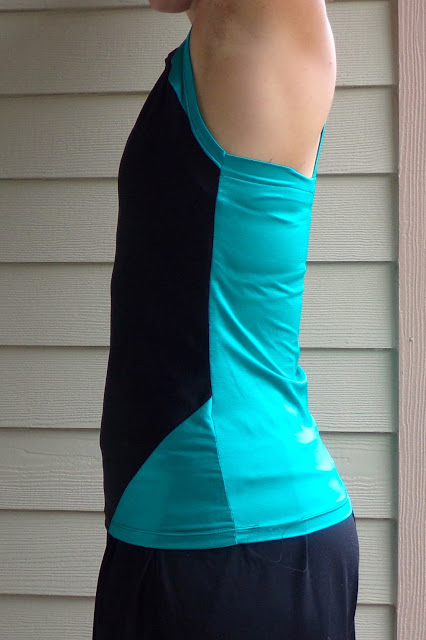 Pattern: Kwik Sew K4163
Material: bought off a lady off Kijiji for cheap
Modifications: added 2 inches in length, and fixing the neck.
Learning: Sometimes pattern pictures are wrong, so think things through before blindly following pictures. Also, neckbands suck.
Overall Impression: This pattern was alright, but after making it I decided it's not really my style, it reminds me too much of a gymnast's outfit. I am glad I got the pattern for the leggings though.
Posted by Amanda Carolyn at 04:13 1 comment: 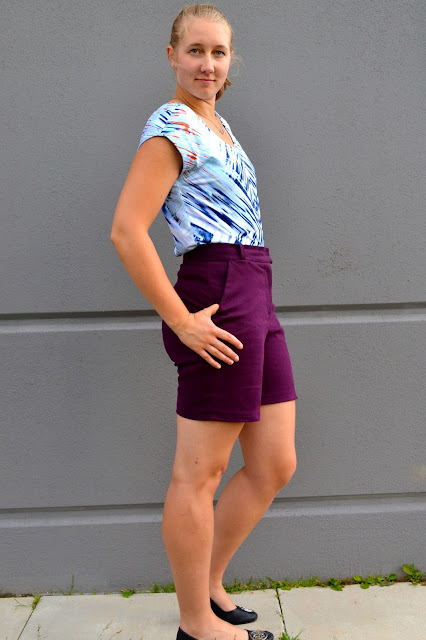 I got accepted as a pattern tester! Woot! These shorts are the recently released Frida shorts by Wardrobe By Me, and the Daisy Dropped Shoulder Blouse, also be Wardrobe By Me. I learned a lot while sewing them, and made about as many mistakes as I usually do, but I'm really happy with the result. These ones are a little higher waisted than the released pattern, and the legs a little larger. Note: The reason I look really flat in the shirt is because I am wearing a sports bra, the only time Ally and I could get together to take pictures was at the field 10 minutes before our Ultimate Frisbee game started. 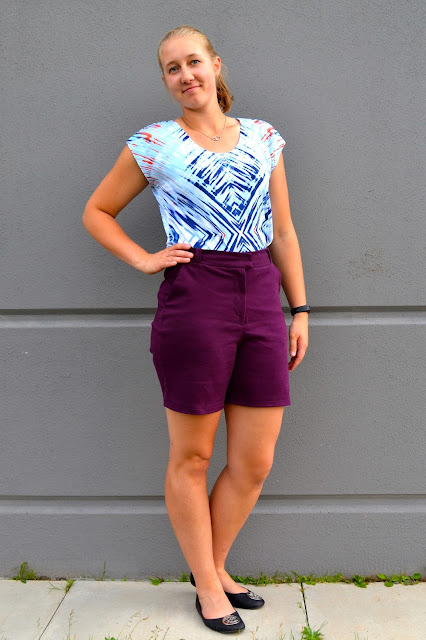 Funny story about the shirt. The Saturday before I needed to have these done I went to a BBQ with people from my church. I told them excitedly about my sewing adventures (people around me unwillingly hear a lot about sewing, sorry people) and that I was going to make a shirt to go with the shorts before church the following day. In theory, this shirt should take about an hour to sew. In reality, due to copying and tracing and shifting fabric, it took me closer to 5 hours, and I still was only kind of happy with the hem the next day. I still wore it to church, but redid the hem later. My husband made fun of me for staying up until midnight trying to finish a shirt only because I told people I would be wearing it. 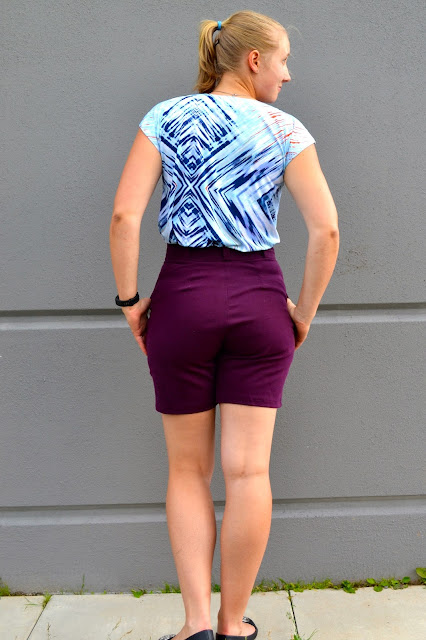 Pattern: Frida Shorts by Wardbrobe By Me (free, for testing)
Material: Free! A sewing shop near me got some fabric dropped off, and then donated it to me and Ally. I bought some yellow cotton for the pocket lining and bias binding.
Modifications: I grade out the hips 2 sizes and added 2 inches in length to the mid thigh length
Learning: So much on this one. I learned how to do a front fly zipper, make beltloops, attach beltloops to a waistband and how to put together pockets. The instructions in the pattern were clear and concise with pictures that walked me through the process.
Overall Impression: I love these shorts and am super excited to finally have shorts that fit (usually they are too loose around the waist and ride up a lot). If you are looking for a shorts pattern that is versatile enough to dress up for summer evenings or maybe even to wear to work (if you have a flexible work environment like I do), this is definitely a good one to try. I have already started another pair, and have plans to make a pair of pants based off the shorts! 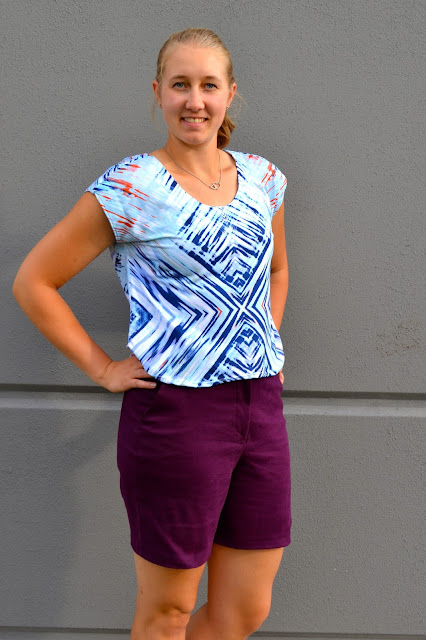 Pattern: Daisy Shirt by Wardrobe By Me (free, so I could model it with my shorts)
Material: On sale for 3.99/meter at Fabricville, I'm still not ready to spend real money on fabric
Modifications: None! I cut a straight 6.
Learning: Not much, although this was my first time sewing a curved hem, and it was a little bit of a disaster. I ended up cutting off the first attempt and redoing the back a bit shorter than I intended.
Overall Impression: I am happy with the pattern and the fabric and the shirt, but to be honest it's not really my style right now. It was a nice simple shirt pattern to (mostly) make in an evening. 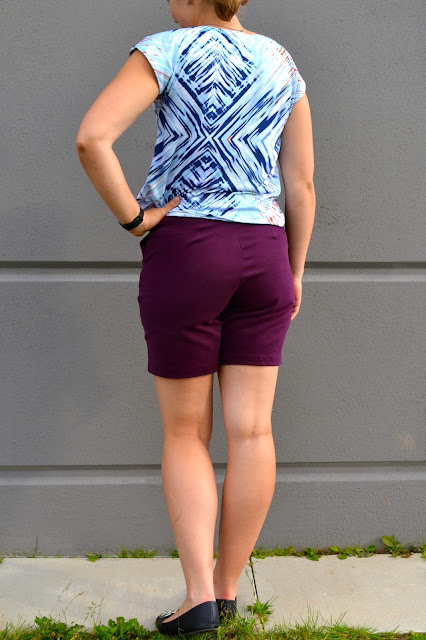 Final notes: The regular price for the shorts is $11. With the code "summer shorts" you get 30% of your purchase. This is also true for the patterns Daisy, Carma Cami, Wardrobe Builder, Savannah shirt, and Piper BoHo. If you are considering buying any of the patterns, I recommend joining the facebook group Wardrobe By Me Pattern Support.

Thanks for reading!
Posted by Amanda Carolyn at 04:14 3 comments: 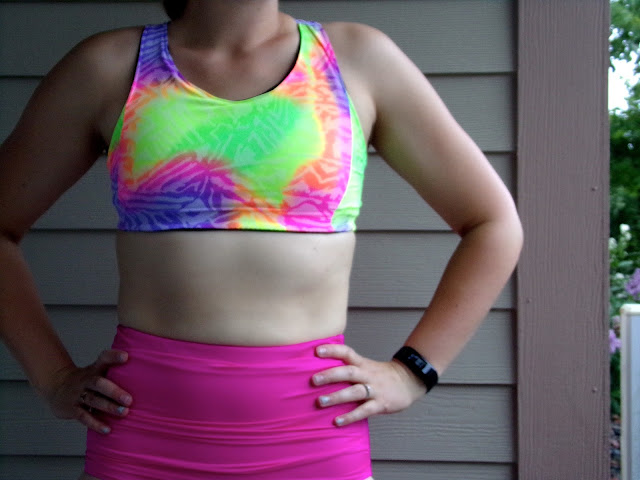 Why just make super colourful leggings, when you can make a matching sports bra to go with it? I barely had enough fabric left to squeeze out the sports bra, and had to do some creative cutting to achieve it, which is why the lining and outer fabric might not match up perfectly. I used leftover fabric from my Charleston dress for the lining, so there was no new fabric required for this project. I once again used a free pattern form The Sewing Rabbit, and it fits me pretty well, I think. 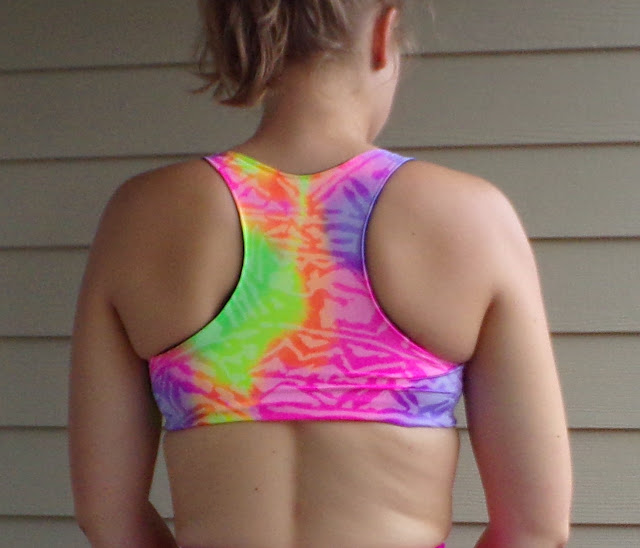 I am very happy with the result. Next time I might lengthen it a bit, and cut the elastic a little bigger, but it stays in place nicely and does what it is supposed to. I'm excited to get into the realm of sewing sports bras and tank tops, because I hate doing laundry and tend to run out of athletic clothing before I can convince my husband to do our laundry (he's really good to me, I know). 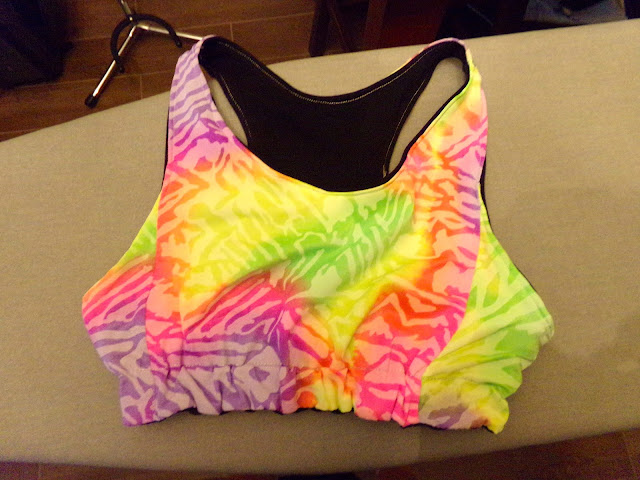 Material: bought off a lady off Kijiji for cheap and left over from another dress
Modifications: None, other than what was required to be able to cut out pieces with my remaining material
Learning: I can make a sports bra! Really though, I didn't need anything new for this one.
Overall Impression: I am really pleased with the pattern, the instructions and the finished product. Time will tell how frequently it will be in my rotation. 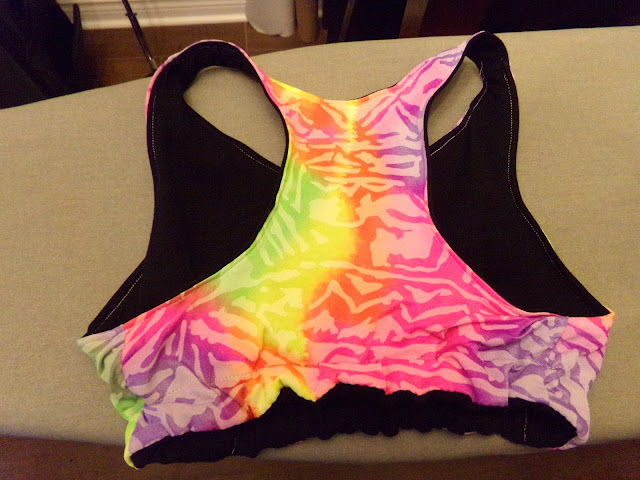