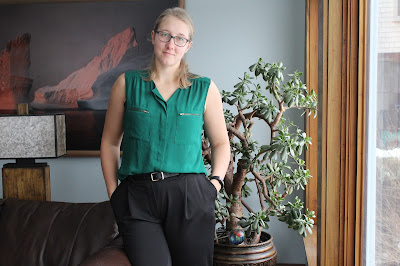 I've been meaning to sew myself more pairs of pants, so when the tester call came out for the paperboy pants, I decided to give them a try. They have a pleated front and elastic in the back waistband with a fake fly. I really like the fake fly and the elastic helps make them super comfortable. They are meant to be made in a ponte fabric, or some other similar knit fabric. There is enough ease that they could be made in a woven, but they would be much less comfortable. 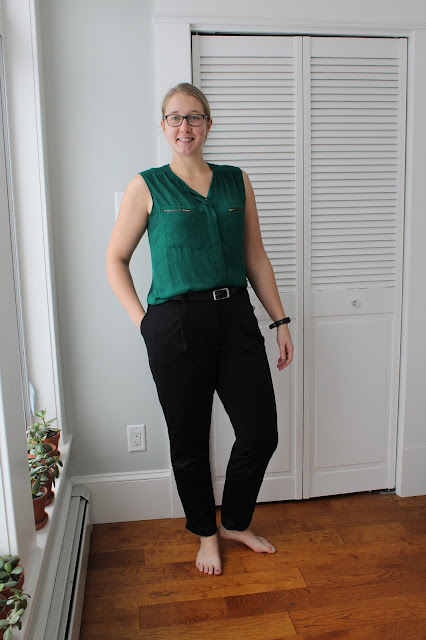 I cut out a straight 14 with a size 10 waistband, and I just made the darts a bit bigger. I should have done a better job with the darts, but I'm not likely going to fix them. This fabric does not press well at all. I made the whole pants on my sewing machine, with the exception of attaching the waistband, which I did on my serger so it would have enough give to get over my hips. They came together very easily and quickly, and would be a good introduction to sewing pants. 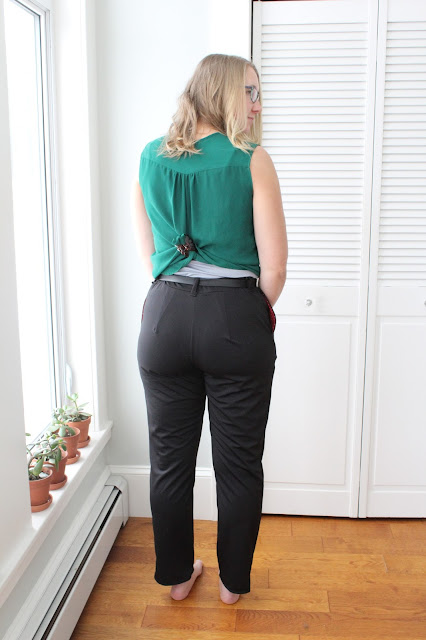 I don't have much else to say here. I managed to get together with Amy right after a brunch we both attended to take these pictures. The brunch was at someone's house with the best windows and the best lighting, so I didn't even need to go outside in the cold to get some good pictures. I love how they turned out, thanks Amy! 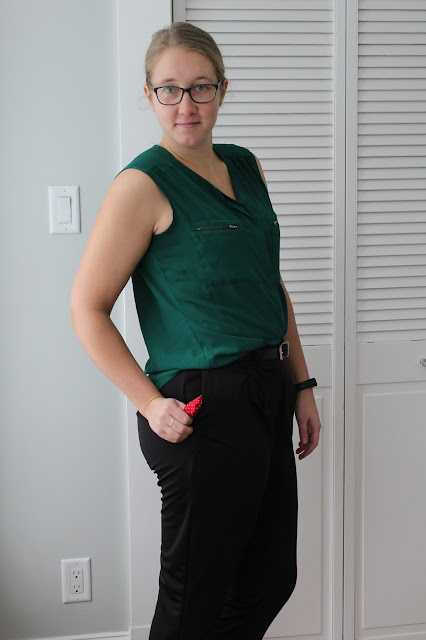 Pattern: Paperboy pants by Wardrobe By Me
Material: A knit with minimal stretch from Fabricville.
Modifications: None! Just mixed and matched to get the right sized waistband
Learning: Pay proper attention to the grading of darts. 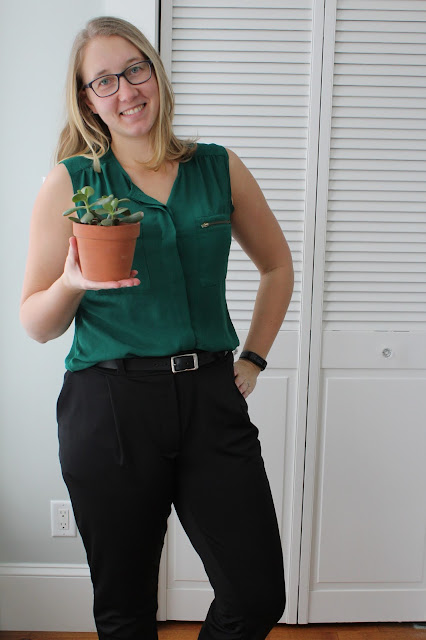 Posted by Amanda Carolyn at 10:45 No comments: 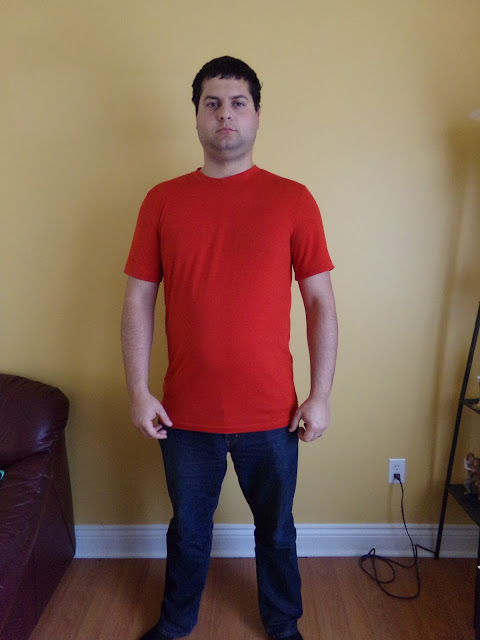 I'm finally pattern testing a pattern for Andrew! Andrew is approximately 6'3", and most of his height is in his torso. His torso is long enough that regular length shirts ride up almost right away, but not long enough that he feels the need to go out of his way to buy shirts in tall sizes. I've been meaning to start sewing shirts for him, but I am much more interested in sewing for myself. When Christina put out the testing call for a men's polo and tee, I immediately responded because I knew it would prompt me to actually make some shirts for Andrew. 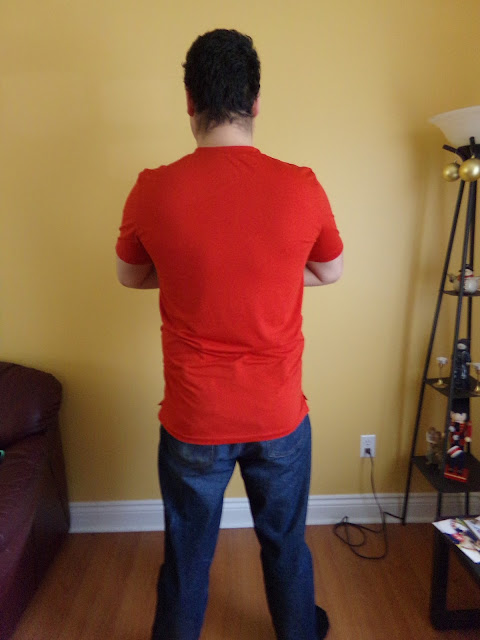 First up was the wearable muslin. I used up most of the rest of the orange knit that I got cheaply at Fabricville to make the t-shirt version so that I didn't waste anything if it turned out poorly. The fit was spot on right out of the box. I added 3 inches in length and that might have been a bit much, but I kind of like it at this length. My biggest mess-up was the neckband - I attached it with the seam in the front. I have left it for now, but I might cut it off and fix it in the future. Until then, let's pretend it is a design feature. 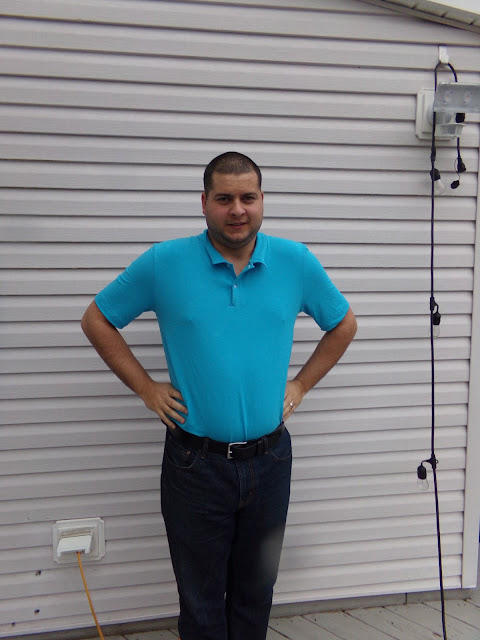 The second shirt is the actual Draper Polo shirt. I bought a new knit from Fabricville on sale for $3/metre in a lovely blue that I thought would complement Andrew's green eyes nicely. The shirt didn't end up looking super great - it's my first polo and my machine was acting up. I should have added interfacing in the collar, but I know that for next time. The pattern is well drafted and the instructions clear - it just required more precision than I was capable of. I will eventually make another one for Andrew, but I need to do some sewing for myself first. 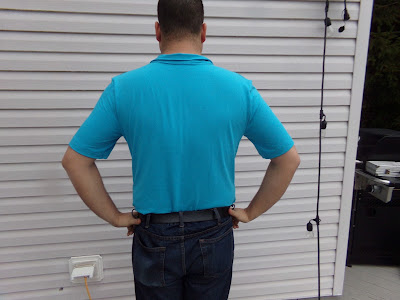 Pattern: Draper Polo by Wardrobe by Me
Material: An orange a blue knit of unknown content
Modifications: Added 3 inches in length
Learning: I now have the knowledge to make polos for Andrew :) Add interfacing to collars. 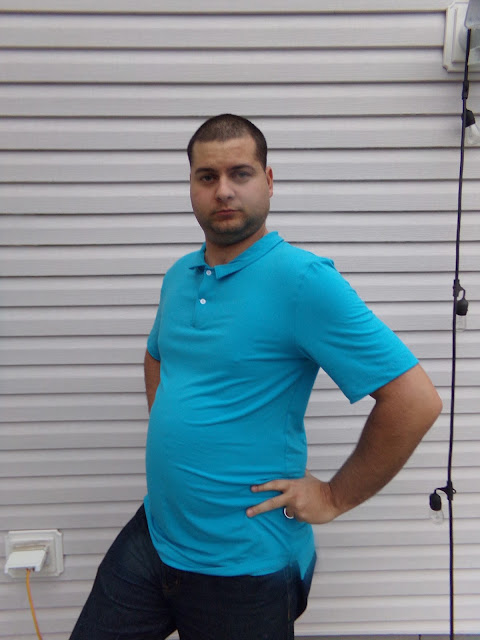 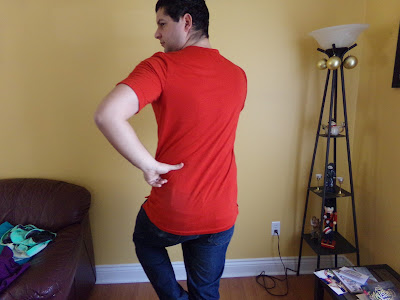 Posted by Amanda Carolyn at 16:32 No comments: 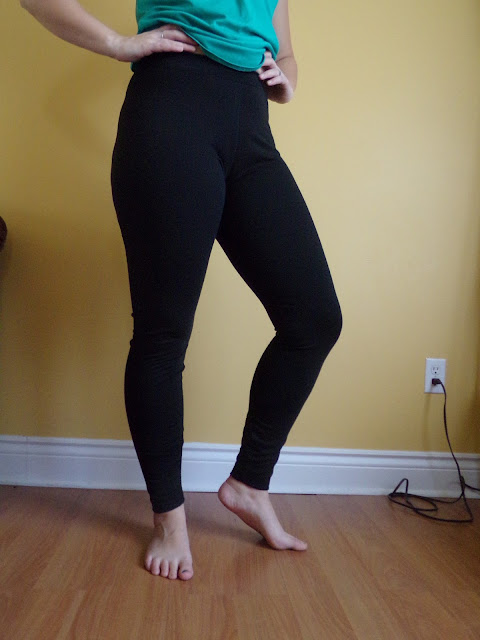 I have mixed feelings about this title, to be honest. It does describe what this blog post is about though: 5 out of 4 Ninja Pants in a black fabric, so I'm going to leave it. I have been meaning to sew myself a pair of dress black tights for ages, and I finally went out and bought 3m of fabric to do it. It's a good thing I did, because the fabric had less stretch than I thought it would, so my first pair went to my mother, who has smaller legs than I do. The second pair is nearly perfect. You might be able to tell in the pictures that the crotch curve isn't perfect, but in this case it's not a big deal because I mostly wear them under dresses. 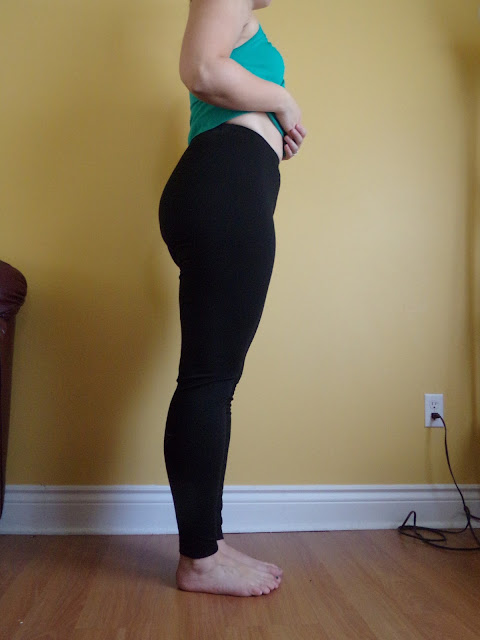 As someone who lives in Nova Scotia, bare legs during the winter is just not feasible. I have fleece-lined tights in black and blue to wear under dresses and sometimes even jeans, but they are no good for wearing with tunics or dresses that are a little too short to be appropriate for the office. Opaque black leggings are the perfect fix. I had already sewn up the P4P Peg Legs and wanted to give the 5oo4 Ninja leggings a try as well. Both patterns are free if you join their Facebook groups, so all it required was some extra taping and tracing. I made up a quick pair of shorts to check the fit, which I now sometimes wear for Frisbee under my shorts. 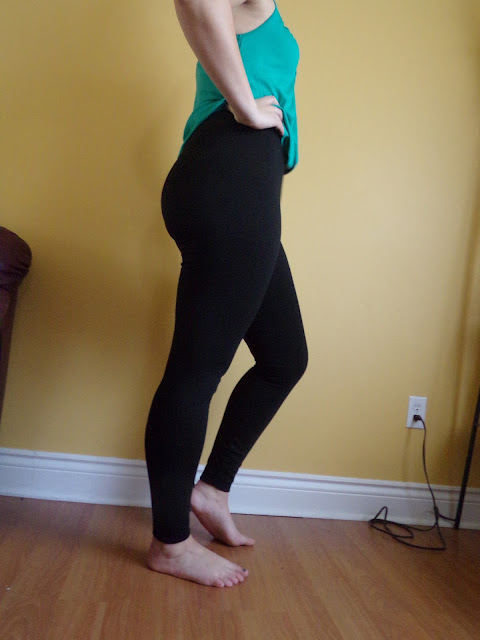 I did the usual grading between 3 sizes to properly accommodate my derriere, added 2 inches of length so they were long enough (my first pair of leggings that are long enough!) and omitted the pocket because I was lazy (I added one in to the pair mom got). There is a bit of extra fabric around the knees, but that doesn't bother me too much. I assembled everything on my serger, and it came together like a dream. I still love my serger, and am definitely putting some miles on it. 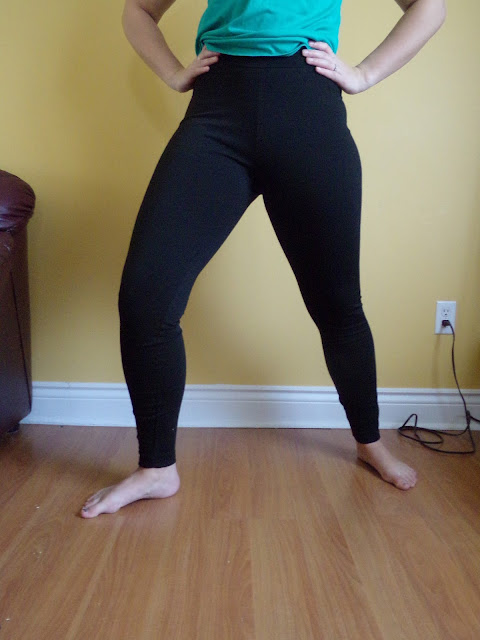 When I sew my next pair I'm going to see if I can fix the extra fabric at the front, but it's better than a camel toe, #realtalk. I love having leggings that are long enough and stay up. I added a 1-inch elastic at the waist to double-ensure they stay up, and while it is sometimes a bit uncomfortable at large dinners (maybe I should take that as a hint not to over-eat), I really like the extra support. I also like that there is enough fabric around my calves so they are not suffocating, which is a common occurrence with store-bought pants for me. 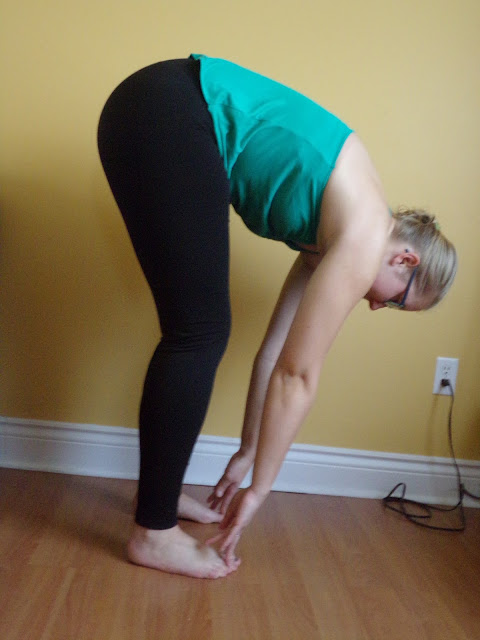 Overall, these leggings are a success (after a failure), and I've already gotten a lot of wear out of them. I love the gusset and optional pocket, and the simple waistband. I'm tempted to see if I can squeeze one more pair out of the fabric I bought, but it's appealing to me to make a skirt or dress out of it.

Pattern: 5 out of 4 Ninja Pants
Material: A black circular knit, I think
Modifications: Graded between sized, sized up to accommodate less stretch, added length
Learning: Be more careful when checking stretch of fabrics, and I finally did a nice gusset! 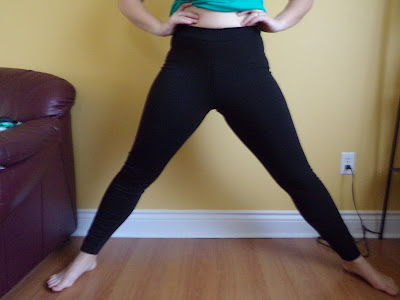 Posted by Amanda Carolyn at 05:00 No comments: 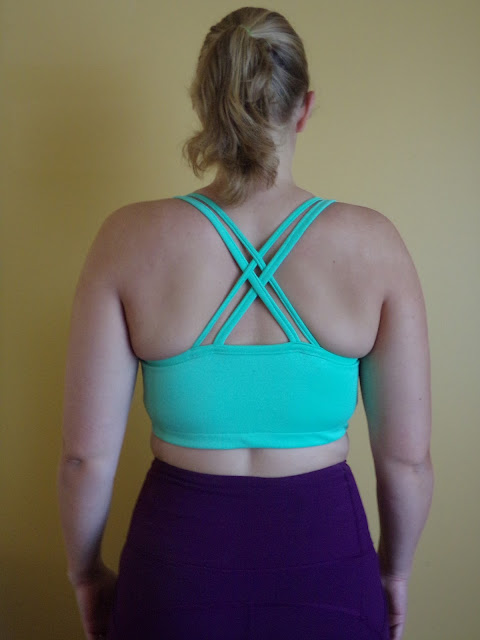 Since I'm not a terribly prolific sewist, I tend to shy away from combining multiple garments in one blog post. In this case, they were such quick sews that I'm alright with putting them together. I bought the agility tank pattern over a year ago because as soon as I saw it I knew I had to have it. I haven't gotten around to making it because I was nervous, and I own a lot of sports bras so I wasn't in a hurry to get new ones. Recently I increased my level of activity by starting boxing, and so I use more athletic wear in a week and have an excuse to give the pattern a try. 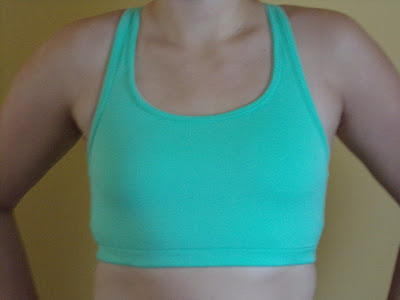 This pattern was much easier than I thought it would be. Once I get around to creating it with an attached tank top I might change my mind, but just making the sports bra was really fast. I don't need a huge amount of support, so I just line them with a different knit fabric. I also like them to finish near the bottom of my ribcage, so they are a bit more longline than the pattern calls for. I opted to make one of each of the variations - a strappy back and t-back. I think I like the look of the strappy back better, and that is what I will make more of. 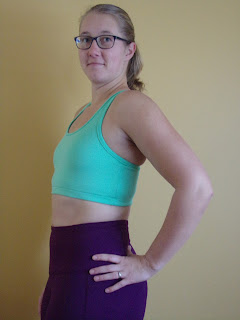 First I made the sea-foam green strappy back bra. One of the reasons that I finally made this is because 5 out of 4 patterns was having a contest that I wanted to enter. Those who follow me on Instagram might remember I posted a picture of this bra next to a picture I found on Pinterest, where I also tried to copy the pose. I didn't win the cover-stitch machine, but I did get a free pattern out of it! I think I'm going to get the riptide shorties so I can make a bathing suit bottom that actually covers my bottom. 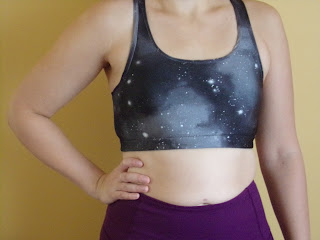 My most amusing mistake with this bra was I started it with some elastic that I had kicking around without really checking the size of it. I ran out of the elastic halfway through, and ran out to pick up some more according to the pattern specifications. When I continued the work, I realized that the elastic that I started with was smaller than the elastic I bought, and this you can see that one set of straps is thinner than the other. Not a big deal, but kind of funny. I lined this one with a bathing suit lining fabric. 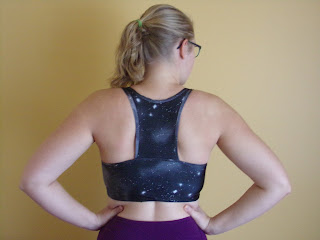 I decided I also wanted to create a galaxy print sports bra, mostly because I had the fabric already, and it wasn't really enough to make much else. Luckily I had enough to make almost 2 full sports bras, because I royally messed up my first try on this one, despite having already made one. I barely glanced at the instructions because I had very recently finished my first one, so I totally forgot to pre-stretch the elastic for the neckband. Turns out that is an important step, because it turned out awful. I re-cut both the front and back pieces in the main and lining fabric and started over and totally omitted the elastic this time (it was optional). From then on it was smooth sailing. I used the leftover main fabric from the first sports bra to make the lining of this one, and it is great against my skin. 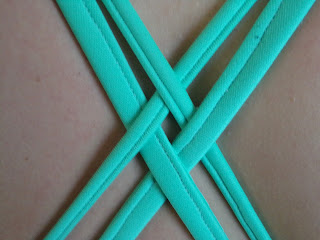 I like this pattern, especially as a base. I might be making modifications in the future based on more inspiration. I didn't bother with cups for these ones, but I might in the future. This is also a maternity/nursing-friendly pattern, which will likely come in handy in a few years.

Pattern: 5 out of 4 Agility Tank
Material: More scuba knit and some bathing suit knit from a random kijiji lady
Modifications: Kept some of the length I was supposed to cut off to make it more longline
Learning: Pre-stretching elastic is an important step! 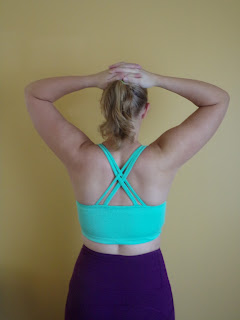 Posted by Amanda Carolyn at 06:10 No comments: